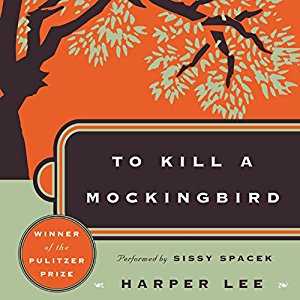 Reading a book as a teenager is not the same experience as reading (or listening to) it as a person in her late 40’s. Wow, this book is something!

Right off, I must say that there is a ton of profanity in this book, and that the plot revolves around a rape case, so it is not a book you would choose to read aloud to your young children, even though the main character (who is utterly delightful)–Scout–is only 8 years old. I typically don’t listen to or read a book with profanity like this, but somehow it seems to be very much in context and understandable as part of the setting and vernacular. I would definitely recommend knowing your teenager to know if this story would be traumatizing or not. But it is a powerful story, for sure.

Here is what I love about it, so far (since I just finished the part where Atticus Finch, the father and defense attorney in the story, gives his closing speech to the jury–hence the title of this post): Atticus represents honor, nobility, integrity and civility towards all men. He is not only the educated man, he is also the thinking man, the moral man, the one who refuses to ignore the criminal in exchange for going along with the crowd. He’s the kind of man a child would want for his father.

Atticus’ daughter Scout reminds us of the pure goodness of unfettered and innocent childhood, of the wonderful, candid honesty that children possess. And she is hilarious.

And so many other characters and descriptions made me laugh out loud while I’ve been listening! Sissy Spacek does a phenomenal job portraying the characters with her voice.

I started listening to this book as I ran, since I’m trying to run longer mileage as I prepare for my half-marathon (…which scares me, so I need a good story to make the runs go by faster…). Then I have turned it on to keep listening as I drive and work and blog about quick dinners because I have to find out what happens! I cannot remember the conclusion from when I read it in high school. I just remember thinking it was a good book back then.

So off I go to finish listening. And I won’t let you know so that I don’t spoil it for you.

(But I will say that the breakfast description after the trial made me cry. And I love Miss Maudie and Calpurnia. And the title of the book and Atticus’ last name. And Scout’s conclusion: “We’re making a step. It’s just a baby step, but it’s a step.” And I agree with Eliza: this book is sad.)