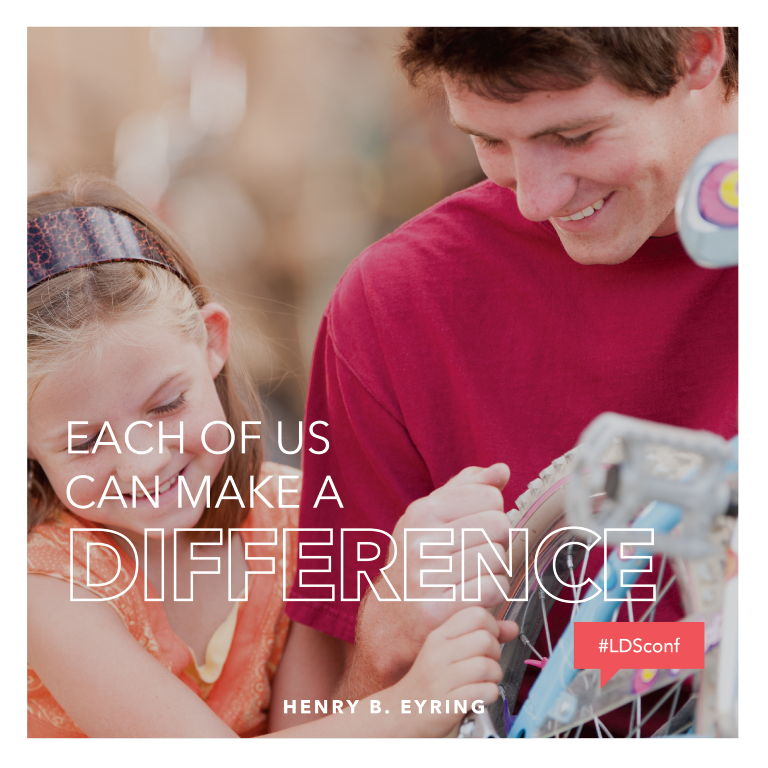 I just finished listening to a talk from last general conference while cleaning the kitchen.

President Eyring and all the members of the First Presidency are some of my greatest heroes.

I love how President Eyring has such a tender heart that, despite his professional and educational background that might make him otherwise eruditely stuffy, he is humble and easily moved to tears as he constantly considers those around him. I love the way he has always talked about the lessons his dad taught him. I almost feel like I know his dad from the stories he has shared over the years.

(One of my favorites is when his dad was working on the church farm and had to pull himself along on the ground. President Eyring relates:

Now you have to know a little bit about my father. His name was Henry Eyring, like mine. He had done some of the things students of this university are preparing to be able to do. His work in chemistry was substantial enough to bring the honors some of you will someday have, but he was still a member of a ward of the Church with his duty to do. To appreciate this story, you have to realize that it occurred when he was nearly eighty and had bone cancer. He had bone cancer so badly in his hips that he could hardly move. The pain was great.

Dad was the senior high councilor in his stake with the responsibility for the welfare farm. An assignment was given to weed a field of onions, so Dad assigned himself to go work on the farm.

Dad never told me how hard it was, but I have met several people who were with him that day. I talked to one of them on the phone the other night to check the story. The one I talked to said that he was weeding in the row next to Dad through much of the day. He told me the same thing that others who were there that day have told me. He said that the pain was so great that Dad was pulling himself along on his stomach with his elbows. He couldn’t kneel. The pain was too great for him to kneel. Everyone who has talked to me has remarked how Dad smiled, and laughed, and talked happily with them as they worked in that field of onions.

Now, this is the joke Dad told me on himself, afterward. He said he was there at the end of the day. After all the work was finished and the onions were all weeded, someone asked him, “Henry, good heavens! You didn’t pull those weeds, did you? Those weeds were sprayed two days ago, and they were going to die anyway.”

Dad just roared. He thought that was the funniest thing. He thought it was a great joke on himself. He had worked through the day in the wrong weeds. They had been sprayed and would have died anyway.

When Dad told me this story, I knew how tough it was. So I said to him, “Dad, how could you make a joke out of that? How could you take it so pleasantly?”

It isn’t hard to see why President Eyring is who he is.

President Eyring reminds me of Lane.

Lane is also one of my heroes.

Our home teacher is also one of our family’s heroes. He comes faithfully and always helps us feel the Spirit. He (and his wife!) always are quick to share a treat, a game, medical expertise, or a book. He respectfully invites his junior companions to share and teach us as well, which we love. I always feel grateful for this kind of role modeling that my children get to see on a monthly basis.

I’m grateful for priesthood men who are trying their best to serve my family and friends, neighbors and the rest of the world! They work very hard trying to juggle all of the responsibilities that are theirs, while avoiding traps that are ever-present and constantly beckoning.

Thank you to the worthy, hard-working priesthood men who are our heroes! We are praying for you!

1 thought on “Psst! My heroes”