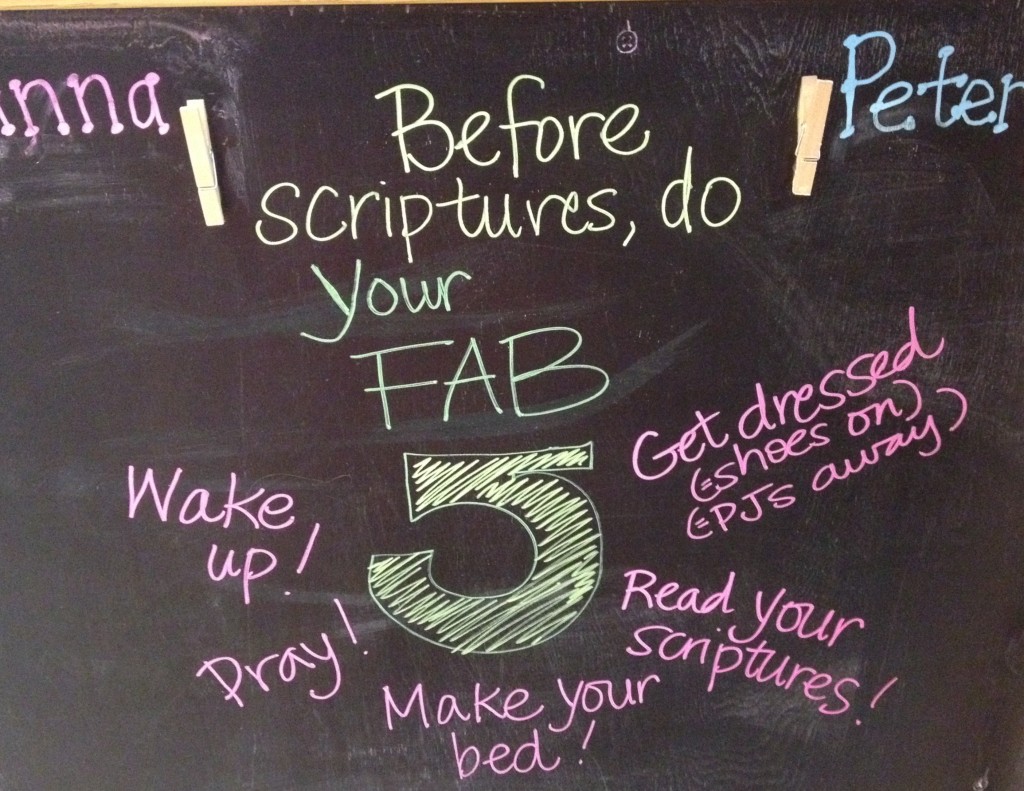 This first week of school went well: only a few tantrums. (I know: I tried not to have any. Maybe I’ll do better next year.) I love the first week of school: everyone’s excitement and energy, hardly homework, some of the lessons not started, getting the house cleaned (or at least the kitchen cleaned well and the laundry all caught up!).

I was considering how to help my youngest children (elementary age) use their time wisely in the mornings, so that when they come home from school, they can have a snack and move on to homework, jobs, and playing. Playing is SO important, and often there isn’t time. I don’t want that to be the general rule. I want them to learn to get up and get themselves ready and their music practicing done, so they can move on to enjoying the rest of the day.

So I decided that 5 things (counted on the fingers of one hand) is not too much to keep in their heads. (I’ve learned over the years that if I put everything that I want them to do in the morning down on a poster, it gets to be overwhelming, but for them to do and for me to follow-up on.) I told them that this year, they were old enough to learn to get up at 6 am everyday, and that they didn’t have to be perfect at it in the beginning, but I hoped that by the end of the school year, they’d have the habit learned. And I also hoped that they would learn to do the “Fab 5” before family scripture study at 6:30 am:

I told them that they don’t have to do it in any order (although it helps to wake up first), and that we can think of a fun way to record and reward progress, if they want. We’ve been mulling some ideas around. We’ll see what we decide.

(I also decided that I’m going to be patient and not expect perfection, but rather keep my eyes focused on the goal of learning to do this by the end of the year. I’m just going to do my best to praise them for all the good efforts they do. I’ve already slipped up on that, but we’ll get there. I can be patient with myself, too.)

The second week of school is always harder than the first, but I know we’ll get into a routine. This year was easier for me to take off my summer routine and put on into my school-year routine, which was a refreshing feeling. In fact, we pulled in from our vacation and got dropped off in front of the school for the open house, and then got up and started school the next morning. We all knew the routine, so with the excitement added, it wasn’t such a major change.