Little Britches (Father and I Were Ranchers) by Ralph Moody 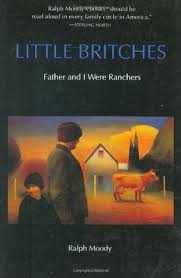 I bought this autobiography on a recommendation from a young viola student I was observing during my teacher’s training a few years ago. She said it was her favorite book ever! I didn’t read it then, but purchased as well the audio version to listen to as a family. We started it on during out Christmas trip to California, but didn’t get to finish it. I listen to it now and then when I can, such as when I’m trying to get back to sleep in the middle of the night!

The children love it.

I can see why that viola student loved it.

This morning we were reading in Mosiah 10 as a family, and we talked about how blaming others for our circumstances or believing that someone owes us something is a tool of the adversary. I couldn’t help but share this part from Little Britches that I had heard just a day or two before. The young narrator, Ralph, is visiting with a girl, Lucy, while their fathers and some other men are helping a neighbor with his harvesting. They just finished a wonderful, large meal at a time when some families didn’t have enough to feed their families.

“Her father had just been fired from a good office job in Denver, but Lucy didn’t care. She said he’d been fired lots of times before so it didn’t make any difference. I remembered what Fred had told Father about needing food for us youngsters more than money, and I told Lucy about it. Then I said that the Aultlands had better things to eat than anybody else in the neighborhood, and I thought Fred would let them live right there if they did enough work.

“Lucy didn’t like that at all. She asked me if I thought her father looked like a darn fool. Then, before I could tell her, she said that only dolts and darn fools lived on ranches, because farmers didn’t need any brains and there was too much hard work to do….

“Then she told me that smart men like her father never did have to work hard, because they knew the world owed them a living and there were easier ways to get it than doing hard work.

“…While we were milking that night, I told Father what Lucy said about her father, and asked him why he didn’t try to do the same thing.

“I only saw Father mad two or three times, but that was one of them. He jumped off his milking stool and came around behind Brindle. His face was gray-white–even his lips were white–and his voice was shaky when he said, ‘Don’t you ever talk to that girl again.’

“He just stood there a minute, as if he didn’t know what he was going to say, then he put the stool right down in front of me and sat on it. He reached out and took hold of my knee hard. His voice didn’t shake then, but he talked low. ‘Son,’ he said, ‘I had hoped you wouldn’t run into anything like this till you were older, but maybe it’s just as well. There are only two kinds of men in this world: Honest men and dishonest men. There are black men and white men and yellow men and red men, but nothing counts except whether they’re honest men or dishonest men.

“Any man who says the world owes you a living is dishonest. The same God that made you and me made this earth. And He planned it so that it would yield every single thing that the people on it need. But He was careful to plan it so that it would only yield up its wealth in exchange for the labor of man. Any man who tries to share in that wealth without contributing the work of his brain or his hands is dishonest.

“…I wish I knew how Father was able to say things so as to make you remember every word of it. If I could remember everything the way I remember the things Father told me, maybe I could be as smart a man as he was (pp.176-177).”

Such a sage explanation!

P.S. I tagged this as a “book for boys” not to exclude anyone from it, because it’s great for girls, teens, moms, dads–the whole clan! But because the narrator is a boy, and he gets into so many scrapes and is so utterly delightfully real boyish, I think boys would particularly enjoy it.

P.S. You can read about half the book on google books. Go here. (It ends on page 175–right before what I quoted.)